Keystone Kops at the ‘Sourdough Rendezvous’

The Sourdough Rendezvous is our winter carnival and it’s happening this weekend.  There’s lots of fun with all kinds of outdoor events, including flour packing, dog team races, chain saw throwing, etc. We also have our world famous snow carvers creating awesome sculptures.  And then there’s the crowning of our Rendezvous Queen.

A great time to get out and take in the excitement, especially when the weather has been cooperating as it has.

But, you have to ‘get with the program’ and wear something that proves you’re in the spirit of things.  Otherwise, you might get ‘arrested’ by the Keystone Kops.

Guess who was their latest target? 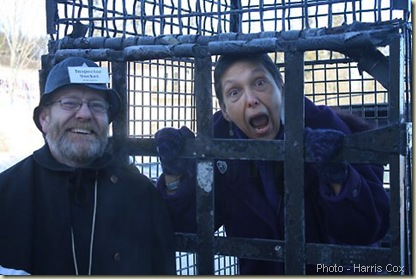 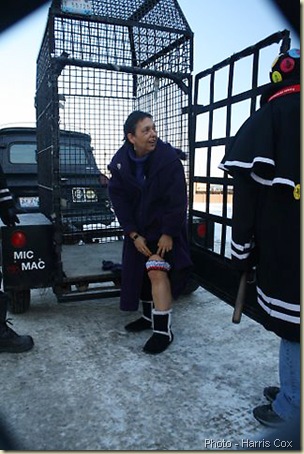 However, she is wearing the traditional Rendezvous garter!! Ha, Ha. 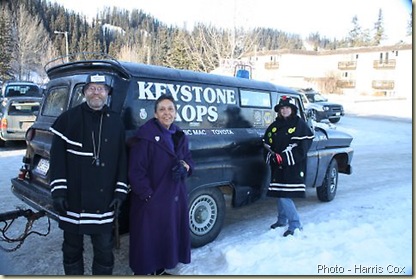 So, all’s well that ends well.

Posted by Whitehorse United Church at 10:59 AM 3 comments:

While convelescing from my recent surgery, I decided to do some reading.

A couple of weeks ago I had, therefore, stopped in at Well-Read Books to find some 'new' reading material - looking for something that might be a bit different from what I would normally read.

One of the books I took away was Lead, Kindly Light - Gandhi & the Way to Peace by Vincent Sheean (Random House 1949). The book's summary on the inside of the dustcover got my attention ...

Though this book is in some sense an attempt to reveal the meaning of Mahatma Gandhi's power and life and teaching, it is, in a more important sense the author's eloquent testament of belief in Ghadhi's mission. Vincent Sheean went to India to ask Gandhi many questions. It was a quest brought on by the failure of every other human institution to supply hope for the future. What he learned there, from Gandhi and others, is of immense, immediate importance to all people everywhere and to the future of humanity.

In the early part of the book, it's clear that for author Sheean a huge mind shift was necessary. Here's some information from his bio, also on the book's dustcover ...

He was a foreign correspondent at the time of Mussolini's march on Rome, he was present in Vienna when Hitler moved into Austria and in Prague when he took Czechoslovakia. And was in Paris when France fell; in England during the Blitz; and left the central pacific Wake Island just one plane ahead of the Japanese attack. He also served in the United States Air Forces in North Africa, Sicily and Italy; in the China-Burma-India Theater, and later in Austria and Germany.

This sets the context for the following comment by Sheean:

... the armature of a child of the century, born in a materialist society in the age of scientific supremacy, was not easily penetrated. We absorb the assumptions of the time and place, almost without knowing it, and find ourselves equipped with weapons we have never bought. It takes years to learn how to throw them all away and go, defenseless and undefending, toward whatever the truth may be.

This observation was made 60 years ago. I can't help but wonder just how many years Sheean contemplated it might take for us, as a society, to learn how to take this different approach. Considering the conflict in the Middle East, in Iraq and Afghanistan, we're not there yet.

Which makes me think the Canadian Department of Peace Initiative is a step in the right direction.

Posted by Hank
Posted by Whitehorse United Church at 8:23 AM 1 comment: 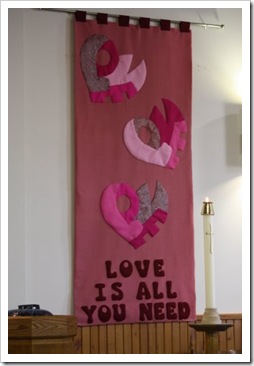 The children from our Joyful Noise Sunday School led this morning’s worship service.

The service included ‘The Story Of St. Valentine’, beautifully narrated by Rebecca Pollard.

The story of Valentine’s Day begins in the 3rd century, with an oppressive Roman emperor and a humble Christian martyr. The Christian’s name was Valentinus.

Claudius, the emperor, had ordered all Romans to worship 12 gods, and he made it a crime to associate with Christians. Anyone caught being friends with a Christian could be put to death!

But Valentinus decided that was not fair. He was determined to follow in the way of Jesus, who taught that we should be friends with everyone. Not even the threat of death could keep him from following his faith. Because of this, he was arrested and sent to prison. He stayed there for the rest of his life. It was horrible.

During the last weeks of his life, while he was in prison, an amazing thing happened. The jailer had come to know Valentinus during the time he was in prison. He saw that Valentinus was a kind man and that he knew a great deal. He asked if he could bring his daughter Julia to Valentinus so she could learn from him.

Julia was a smart girl with a quick mind. She came to the jail, where Valentinus gave her lessons about science and math. He taught her to read, and told her about God. She learned so much from him.

The day came when Valentinus was going to killed for his faith. The evening before his death, Valentinus wrote a little note to Julia, urging her to keep learning and to stay close to God. He signed it, “from your Valentine”.

His death sentence was carried out the next day, February 14th, in the year 270, near a gate later named Porta Valentini in his memory. He was buried in Rome.

It is said that Julia herself planted a pink blossomed almond tree near his grave. Today, the almond tree remains as a symbol of abiding love and friendship.

On each February 14th, messages of love are exchanged all around the world, because of this brave man and his friend Julia.