As I write this it's Australia Day, Jan 26th. From Nov 2007 to April 2008 I was in Australia doing a pulpit exchange there, and so I feel very close to that place and those people. I have to say that going to Australia was NOT a life long dream; the opportunity presented itself and I just said "why not?". I am so glad I did that. I was prepared to have a good time because I tend to have a good time wherever I go, but I was certainly not prepared for the way the people and that land got into my being. I traded churches with a woman from there; she came to New Brunswick and served my church while I went there and served hers. The Australian parish I served was made up of five little churches in the towns/villages of Ouyen, Walpeup, Underbool, Speed and Patchewollock. I LOVE THOSE PEOPLE!!! They were so kind to me,and so understanding as I somtimes struggled to understand what was being said. My first week there I had to ask for help so that I could decipher the messages on my answering machine! I'm usually good with accents but not that time.
The church was a cooperative parish between the Anglican church and the Uniting Church of Australia (the very same union as our United Church of Canada: the Presbyterian, Methodist and Congregationalist churches. Our union happened in 1925 and theirs 50 years later it was fascinating to see a younger version of the union at work)
I lived in Ouyen, which is in Victoria State, 5 hours from Melbourne. It is wheat growing/sheep farming country and they were (and still are) in the midst of a debilitating drought.
It is an experience i will never every forget. I'll tell you more if you want to know! I can speak for a loooooong time about that.

Posted by Bev
Posted by Whitehorse United Church at 12:03 PM No comments:

In response to the humanitarian crisis provoked in Haiti by the serious earthquake on Tuesday, January 12th, the United Church of Canada is appealing for donations to support relief and reconstruction efforts. The Church as already committed $20,000 to relief efforts by partners in the region.

Members of ACT Alliance (the network of churches and Christian aid agencies that enables global responses to emergencies) are already in place, assisting those affected by the earthquake. In response to the disaster, Canada initially pledged $5 million in humanitarian aid to Haiti and deployed the military's Disaster Assistance Response Team, known as DART. The Prime Minister has more recently announced that the $5 million cap would be raised.

How United Church People Can Help

Cheques and online donations should be made payable to the United Church of Canada and marked 'Haiti Appeal'. The funds will be treated as 'designated gifts'. Please note: Designated gifts cannot be counted as M&S Fund credits. However, they are eligible for tax receipts.

At our Annual Financial Meeting yesterday, a motion was passed to contribute the net proceeds of this year's Shrove Tuesday Pancake Supper to the Haiti Appeal.

Let us call upon our churches to pray and to respond to this devastation, to bow and unite our hearts, praying for:

Posted by Whitehorse United Church at 3:48 PM No comments:

The United Church of Canada has today issued a press release on how the Church will respond, as part of the worldwide church community, to the results of the devastating earthquake in Haiti.

The press release can be found on the UCC web site at www.united-church.ca.

The United Church of Canada is also making an appeal to local church congregations to turn their minds to how we can contribute.

I’m making this blog entry for the purpose of turning our minds to this urgent need. Comments are invited.

Posted by Whitehorse United Church at 5:57 PM No comments:

For those who may not have seen the bulletin for Sunday, December 27th., the cover featured another one of Harris Cox’s photos.

The photo is a winter scene from McIntyre Creek in Whitehorse. 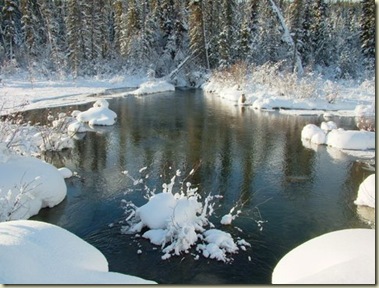 Nice job, Harris! What a great way to end 2009 with your photo on all the Sunday service bulletins in United Churches across Canada - and to share a bit of our corner of the country with all those congregations at the same time.

Posted by Whitehorse United Church at 8:27 AM 2 comments: 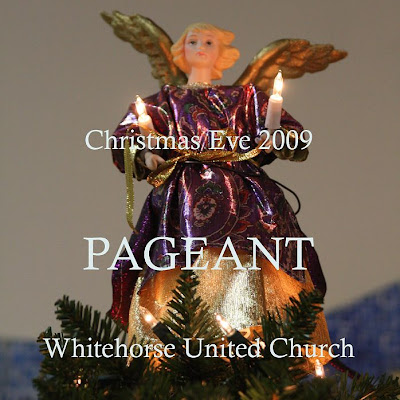 The wonderful Christmas Eve Pageant is now up on the web site!
On the home page http://www.whitehorseunited.org/ you will see the link 'Photo Gallery'. Click on this for the Photo Gallery viewer.

Here are a few tips for using the Photo Gallery viewer:

Posted by Hank
Posted by Whitehorse United Church at 7:49 PM No comments:

Bev keeps in touch with friends who don’t live in Whitehorse through facebook. Her own daily post always includes something she calls her “Gertie Project”.

She says, "It’s named after my mother who taught me to be thankful for simple things. Each day I list on line five things for which I’m thankful. They range from the grand (eg for life and for the magestic night sky) to the mundane (eg for the smell of coffee in the morning).

One particularly cold day I said 'I’m thankful for warm fuzzy socks.' Then, on a whim, I added 'so if anyone wants to send me any, I like funky colours, so here’s my address!'

THEN my friend Irene suggested turning it into a contest. People would send me socks, at a certain date I would choose the winning pair, keep those, and give the rest to the outreach van.

So that’s what we suggested. My facebook friends were invited to play my sock game. As the socks continued to come in (over 50 pair at the cut off date, with more apparently on the way) I decided that I would like someone else to choose the winning pair, and so the Sunday School children helped to do that the first Sunday of 2010. After much discussion, a neon pink pair with red pom poms was their choice." 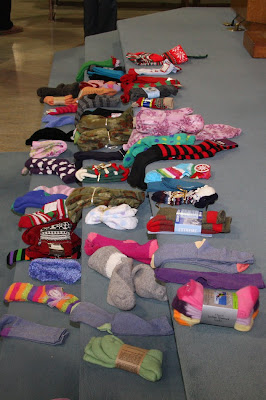 The idea here was to pick the most bizarre, interesting, colourful, or even hideous, pair for Bev to keep. The rest to be donated to the Outreach Van. 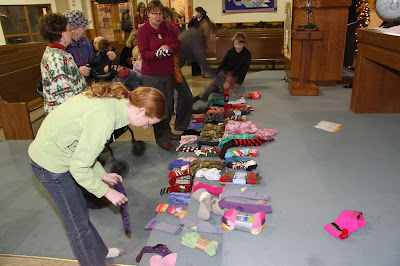 And, the most popular choice - the pair of 'electric' neon pink socks! 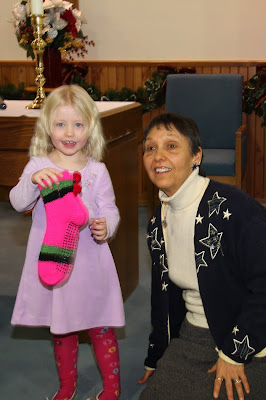 With the start of the new year and the new decade, it's a great time for new beginnings. So, this blog has been launched. We hope it can become a place to highlight events, to tell some stories, or share interesting snippets of information. And also to ask some questions and generate discussion through the 'comments' feature unique to a blog.

Posted by Hank
Posted by Whitehorse United Church at 3:39 PM No comments: